However, there is a new project to support – Let´s CHANGE!

Different from the predecessor, Let’s CHANGE comes with several innovative ideas that will enhance the outreach of our work. For instance, there will be some changes regarding the recruitment of CHANGE Agents: Apart from our experienced cooperation with African diaspora communities, we invite members from other migrant communities, like Indonesia, Iraq or Afghanistan, to participate in our project. In addition to that, the implementation of the project will be joined by three partner organisations namely Plan International in Hamburg (Germany), FSAN in Amsterdam (Netherlands) and Paris-based Equipop (France). The partnership’s aim is not only to raise awareness about FGM on an international level, but also implement concrete actions against it by working intensively with affected communities.

To get further and current information, please visit our websites:

CHANGE Project Continues Engagement to Combat FGM in the EU

The European Commission has already funded several EU-wide projects under the framework of the END FGM network. The latest project CHANGE Plus has even turned out to be a big progress within the EU since cooperating partners and participating diasporas established more efficient and effective strategies to overcome female genital mutilation (FGM) in the European Union. However, the fight against FGM does not end with the final implementation of CHANGE Plus. In fact, engaging in the prevention of this harmful practice requires long-term commitment and constant effort to manifest and strengthen previous work.

With that in mind, TERRE DES FEMMES is very happy to inform you of the Commission’s positive response to co-fund another joint project in order to continue working with CHANGE Agents in various EU countries. Since the former CHANGE Plus project has successfully ended in January 15 of this year, TDF is already occupied with the coordination of the next project called Let’s CHANGE. 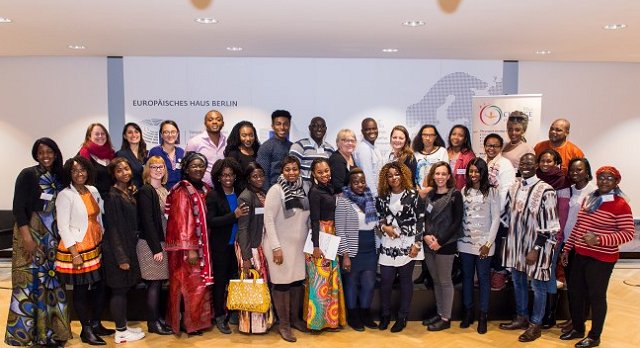 Change Agents and speakers of the CHANGE Plus Final Conference. Photo: © Martin Funcke

On the 23rd November 2017 the CHANGE Plus partner organizations, CHANGE Agents and Champions, FGM activists, community members, policy makers, key professionals and scientists met on the occasion of the final conference of the EU co-funded CHANGE Plus project. The participants reflected their cooperation of the last two years, talked about their experiences, presented and evaluated results and discussed strategies for the abandonment of female genital mutilation (FGM).

The conference, which was organized by TDF Project Coordinator Charlotte Weil, started with three opening speeches. Laila Wold welcomed the participants in the name of the information office of the European Parliament in Germany. Prof. Godula Kosack, Board Member of TERRE DES FEMMES, introduced the audience into the topic of FGM and handed over to Rakieta Sawadogo Poyga, patron of the CHANGE Plus project and founder of the organization Association Bangr Nooma (ABN). She travelled from Burkina Faso to the conference and talked about her long-time experience in the fight against female genital mutilation. 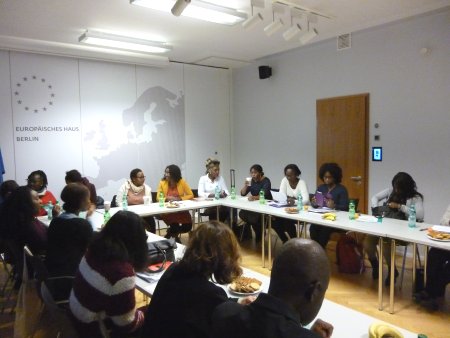 European Exchange Meeting CHANGE Plus. Photo: © TERRE DES FEMMESOn 22nd November 2017 the European Exchange Meeting (as part of the CHANGE Plus project) took place in Berlin. CHANGE Agents from each partner organization attended the meeting to exchange views, share their experiences in the project, and prepare for the flag action and the final conference on the 23rd. The Change Agents discussed the following topics: “Engaging as a CHANGE Agent/Champion – why and how?”, “Talking about challenges – how do you respond to resistance/rejection?”, “Lessons learned – how to improve the work as a CHANGE Agent?”, “Working with media – Strategies and self-care” and “Targeting the political level – lobbying and advocacy work”. Very fruitful discussions and mutual learning took place.

We would like to thank all the CHANGE Agents for their participation.

On October 12th 2017 the CHANGE agents of the CHANGE plus project met for their ninth exchange meeting. The meeting was used to reflect recent activities, to discuss the project and to consider how to proceed with the team CHANGE.

The last milestones of the CHANGE Plus project are the CHANGE Plus Final Conference - "Protecting Girls - Together Against Female Genital Mutilation" on 23th November 2017 and a Public Certification Event for the CHANGE agents on 9th December 2017.

We would like to thank the CHANGE team once again for their commitment and dedication and we are looking forward to further cooperation! 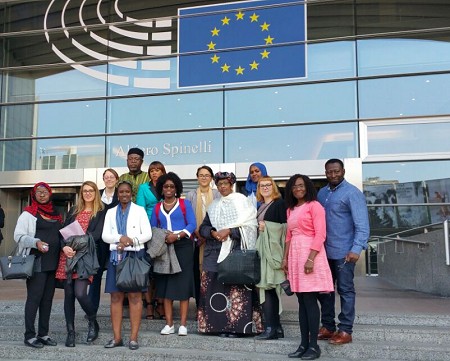 Photo: © End FGMOn September 26th 2017, the CHANGE Champions/Agents met with about 30 members of the European Parliament in Brussels and other stakeholders. The goal was to advocate the support for survivors and the protection of young girls. Therefore, the representatives engaged in dialogue with the politicians, sharing their experiences and challenges from the grassroot levels. In addition, political demands were made and advice was given on how to further tackle FGM.

The meeting was hosted by MEPs Julie Ward (S&D) & Anna Maria Corazza Bildt (EPP). The project coordinator Charlotte Weil started with a general presentation of the CHANGE Plus project. Afterwards, representatives of the project consortium and local communities presented their experiences and so far outcomes of the project. Thus, an extract of „Amina“, an awareness-raising video developed, written and played by CHANGE Champions in Hamburg about the situation of FGM survivors in Germany, was presented. 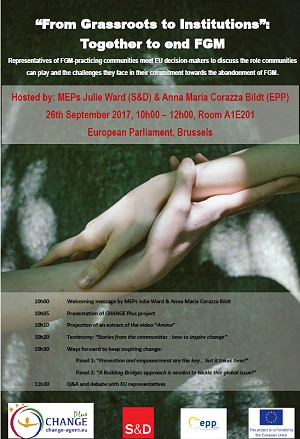 On September 26th 2017, representatives of FGM-practising communities will meet EU decision-makers in the European Parliament in Brussels. As part of the CHANGE Plus project, selected CHANGE Agents of the previous project, so called CHANGE Champions, passed a special leadership training to become active on the institutional level, advocating the support of survivors and the protection of girls. In this lobbying meeting, the CHANGE Agents/Champions will have the chance to seek dialogue with politicians on the European level and share their experiences from the grassroots level, giving advise on how to further tackle FGM.

A briefing for journalists will follow the meeting in the European Parliament.

In the afternoon a delegation of the representatives will meet with Monika Ladmanova, Gender Adviser in the Cabinet of the Directorate-General for Justice and Consumers (DG JUST) to discuss experiences, future steps and demand further involvements and actions of the EU.

A parallel session for exchange of experiences between community representatives and other Brussels based NGOs is organised to elaborate common strategies and innovative solutions to achieve the common goal of putting an end to the practice of FGM in Europe and beyond. This meeting will take place at Mundo B, Rue d’Edimbourg 26, 1050 Brussels.

Final CHANGE Plus Conference „Protecting Girls! Together against Female Genital Mutilation“ on 23rd November 2017 in Berlin

On the occasion of the International Day „NO to violence against women!“ TERRE DES FEMMES organizes together with seven European partners the final conference of the CHANGE Plus project.

The final conference brings together FGM activists, community members, policymakers, key professionals and researchers to exchange experiences and to evaluate the impact of the CHANGE Plus project as well as to discuss the outcome of the strategies for the eradication of female genital mutilation across the European Union.