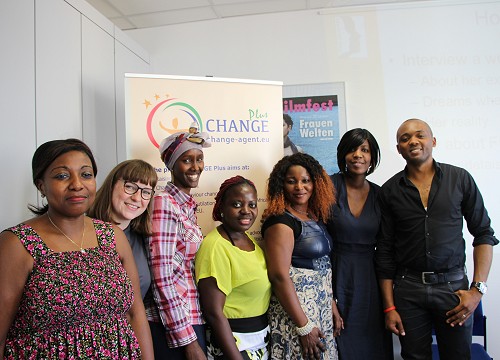 This first training gave the opportunity to all CHANGE Agents to introduce themselves and to get to know each other. The session started with an exchange about their individual life path, their motivation to be a CHANGE Agent and their personal expectations for the coming months. They then agreed about the types of behaviours to be adopted during the sessions. Next, Charlotte Weil, Project Coordinator of CHANGE Plus, explained the programme and the different project activities. The presentation inspired positive debates and the exchange of many ideas. The Agents shared their knowledge and experiences of FGM.

After the lunch break, Idah Nabateregga introduced FGM, which led to many discussions. As facilitator, she emphasised that FGM is a global issue and she further explained the different types of FGM and associated risks and consequences. The following topics were then covered: conformity mechanisms, prevalence and economic and social consequences.

The training closed with a participatory exercise during which CHANGE Agents developed their own guidelines. The Agents interacted and debated, designing together what they thought to be the best way to create changes and implement activities among their communities. The session was marked by diversity, commitment, and cohesion, predicting promising results.

The next training session in Berlin will take place on the 17th September. It will deal with two topics of great importance: Gender and women’s rights, followed by legal issues related to FGM.