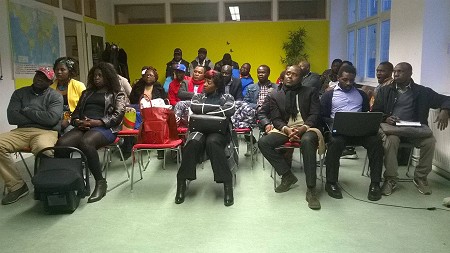 Photo: © TERRE DES FEMMESCHANGE Agent Colette Tchombou’s last BCA took place in Berlin Zehlendorf on August 12th. She took advantage of the nice summer weather and organized a barbecue evening. Colette started to talk about the topic female genital mutilation, explained the consequences and showed some pictures to explain the different types. During the evening a lively conversation developed and many questions arose. A lot of the people present weren’t aware that FGM exists and stunned that it is also a problem in Europe. The discussion led to the desire to get more information about FGM and to get in exchange with more people about it. This led to another spontaneous meeting on the 13th August in Berlin Wedding, which was pushed by guests present on Saturday evening. After another fruitful discussion the guests decided to share what they had learned with other people and expressed the wish that Colette should return and talk about the topic again.

Over the past few years, TERRE DES FEMMES has been increasingly engaged in community work to overcome female genital mutilation with the goal of rethinking within affected populations. All our CHANGE agents trained last year actively contribute to the education and awareness of FGM with their activities.

TERRE DES FEMMES would like to thank Colette Tchombou for her support.