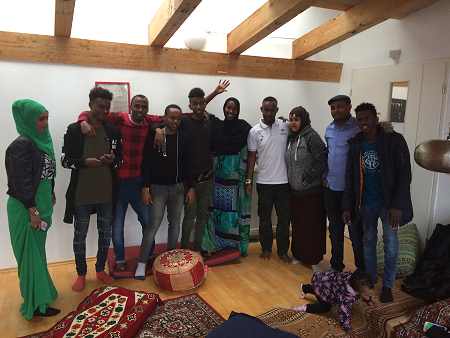 CHANGE Plus Community Activity. Photo: © TERRE DES FEMMESOn February 25, the CHANGE Agents in Berlin got together for an exchange meeting. Fadhumo Musa Afrah had already conducted her three behaviour change activities in January and February and now reported on the intra-communal discussion on FGM that she initiated. Fadhumo pointed out that the challenges for organizing the behaviour change activities lay mostly in the difficulty to mobilize community members to discuss FGM and join a meeting.

In her attempt to reach people from the Somali community and sensitize them to the topic of FGM/C, Fadhumo set up meetings with three different groups of participants. For the first meeting, only women were invited; the second meeting was with men only. The third get-together had a mixed group of participants.

For the first behaviour change activity, Fadhumo created a pleasant and open atmosphere in which the women felt increasingly comfortable to speak freely about the ‘taboo subject’ of FGM/C. In their open conversation, the women discussed FGM and its implications, shared experiences and opinions. Some talked about how FGM affected them physically and emotionally whereas others said there had hardly any problems due to their circumcision. A few women believed in the continuance of the practice, yet most were keen to discuss ideas about possibilities to end FGM.

The second meeting was for men only. Together with Fadhumo they had an interesting discussion in which they exchanged their opinions and personal views. The men of the group were rather divided in their attitudes towards FGM. A few rejected the practice whereas others made clear distinctions about which form of FGM/C could be found tolerable as a traditional custom and which were considered harmful. The issue of circumcision and marriage was also being debated.

For the third time, Fadhumo met with a mixed group of women and men. This gender-mixed setting provided for an exchange and discussion on FGM that was quite distinctive. There was less interaction compared to the previous two meetings and only a few women spoke while men were predominant in the conversation. Yet it was a valuable opportunity to break the taboo on discussing FGM between the genders.

Overall it became clear that all three meetings helped to increase knowledge on FGM and its effects as initially most women and men were foremost aware of the traditional aspect of the practice. The three meetings as behaviour change activities certainly set an exchange and a debate in motion, and increased awareness of FGM and its implications. Still, educational work needs to continue – to induce a change in attitude and behaviour towards the rejection of all forms of female genital mutilation.