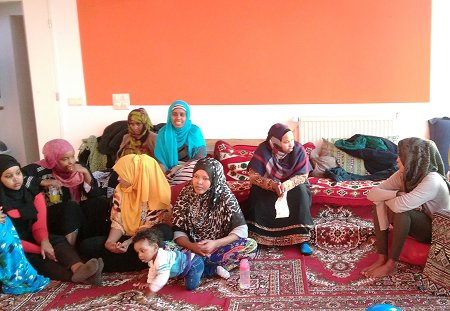 On Sunday, 22nd January 2017, Fadhumo Musa Afrah, CHANGE Agent in Berlin, conducted the first of three behaviour change activities in her community. The activity took place in the rooms of Sharehaus Refugio. The activity was meant to raise awareness on the subject of FGM/C. For this first event, only women from the Somali community were invited. The women mostly came from the Berlin-Brandenburg area, but some even went to the lengths of travelling to Berlin from Osnabrück. About 15-20 women attended the meeting. They were motivated to talk about FGM/C and possible measures of prevention.

Fadhumo Musa managed to create a pleasant and confidence-inspiring atmosphere that gave the women the opportunity to speak freely and without feeling shameful about a subject that is generally regarded as taboo. The four-hour meeting started with a warm welcome and introduction to the topic by Fadhumo Musa. After that, an open conversation about female genital mutilation in general, the women´s personal experiences and the possibility to end the practice took place. All attending women were convinced that female genital mutilation has to be abolished and exchanged ideas about how to accomplish this.

After the official ending of the event, the participants had the possibility for further exchange amongst themselves.