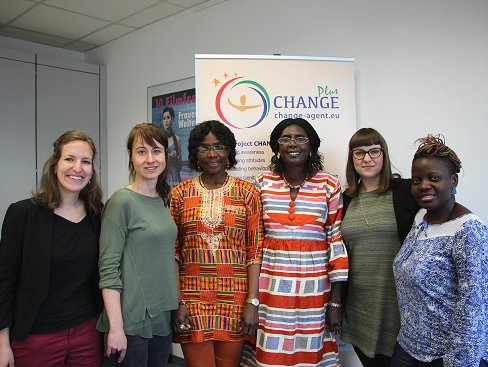 left to right: Agnes Kübler (TDF), Linda Ederberg (TDF), Gwladys Awo (Plan), Fatoumata Siré Diakité (APDF), Charlotte Weil (TDF), Idah Nabateregga (TDF). Photo: ©TDFCHANGE Plus coordinators Charlotte Weil and Linda Ederberg as well as Idah Nabateregga, who will be training the CHANGE Agents at TERRE DES FEMMES and Gwladys Awo, who is responsible for the implementation of CHANGE Plus at Plan Stiftung, had the great occasion to meet up with the project’s patron Fatoumata Siré Diakité during her stay in Germany this week. This meeting was all the more refreshing as until now, the only contact between the project coordination in Berlin and the patron in Bamako had been via email.

From 2005 to 2011, Mrs Diakité was the ambassador of Mali in Germany, but most of all she is famous for her unwavering, tireless commitment to defending girl’s and women’s rights. She is the founder of APDF, an organisation dedicated to the support of girls and women affected by violence. APDF is also at the forefront of the fight against FGM in Mali, where 89% of girls and women are affected by FGM. Her devotion to putting an end to violence against women and her long-lasting experience in this field make her the perfect patron for CHANGE Plus.

The meeting did not only provide the fine opportunity to finally get to know each other personally and to outline the future collaboration, but also to exchange experiences. In the course of the conversation, many parallels between the challenges activists face when opposing FGM in Mali and those occurring when working with affected communities in Germany began to show. Obviously, there are a lot of differences, too, but some aspects are quite similar, for example the widespread conviction that FGM is a religious duty. Therefore, sharing best practises and intervention strategies will play a main role in the future collaboration.

This first meeting was a very promising start and our upcoming collaboration will translate into equally promising results!